Why do people tilt their heads when they are trying to examine something closely?  Funny, huh?  Seems like you’d want to look at something square on.

There’s a word in Korean “삐딱이”, or bbiddaki (I think I’m slaughtering the Romanization, my apologies, but this is what you get for reading the writing of someone who never had any formal Korean schooling), I’ve heard it translated as rebel, but my mom says it is closer to sarcastic.   I think a very literal translation would be one who stands crookedly.

I recently came across a saying that uses this word: “삐딱이만 삐둘어진 세상을 제데로 볼수있다.”  My very, very rough translation goes something like, Only one who stands crooked can see the true crooked nature of the world.

I’ve been chewing this over for a while, and I think my peeps are onto something.

When we started figuring out that LP had Down syndrome, the world really did tilt for us.  Or, rather, we tilted.  Hard.  From his perspective, all he did was leave my belly, eat, sleep, poop and try to do his thing.  From our perspective?  The entire world as we knew it changed in about three days’ time.  Not that we aren’t always changing, but that one was an earth-shaking kind of big.  I sometimes try to remember who I even was before the diagnosis, and it is near impossible.  I try, but that person is foreign to me now.

I’ve mulled over that period in our lives (as I suspect I will continue to do for the rest of my life), and while I do remember a lot of anguish and crying, I also remember that after that first storm was a beautiful calm.  I had a strange sense of peace that I could not explain.  Each time I tried people kind of looked at me like I was close to a psychotic break, even though nothing was further from the truth.  So I stopped trying to explain it, but it didn’t make it any less real.

Maybe not a rebel, because I never chose to have Down syndrome enter into our lives, but I did suddenly find myself off the beaten path.  I found myself looking at the world, really carefully, tilting my head.  Crooked.

What did I see?  A world that had created such a narrow passage to human worth, so narrow that most people couldn’t pass.  A world where human beings were trampling over each other to get through that impossible passage.  Creating hierarchies of beauty, intelligence, and ability that serve no one.

It isn’t the first time I’ve tilted my head at the world, and hopefully won’t be the last.  I think at the heart of privilege, no matter what the basis, is that it is near impossible to see the distortions that cause inequity in the world.  It is important though, whether by chance or through intent, to stand crookedly. 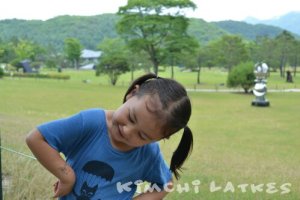