← Inhabiting the Place Between
Rainbows and Unicorns, Surfing, My Baby. →

I have never kicked anyone’s ass, nor has anyone ever kicked mine. I made it all the way through childhood without ever being involved in a beat down. As a man, some will applaud me for this; others will take pity. I can’t deny that I’m glad to have never had my ass handed to me, but I admit there’s a small part of me that wonders what it’s like to be part of that club.

When I was in middle school, there was a scrawny little kid named Anson. He hung out with the hesher/motorhead dudes. My crew was the pseudo hippie/granola set–ponytails, birkenstocks, hemp necklaces, etc.

Our two cliques got along fine, but at some point Anson decided he didn’t like me, and he started talking all kinds of sh*t for no reason.  Frustratingly, the little coward always did this in the presence of Big Brian, the leader of their group, who also happened to be a six-foot giant with a serious reputation as an ass-kicker. My hands were tied.

One beautiful spring day, I had to take a wizz during science class, so I grabbed a hall pass and set out for the boys room. As I was enjoying my quiet stroll down the empty hallway (remember that feeling of freedom…?), I had the good fortune of bumping into that snaggletoothed little pisher Anson.

When our eyes met, I saw the uncertainty in his face.  On the one hand, he (a) wanted to keep up appearances by talking some sh*t to me, but (b) on the other hand, was outside the nest and Big Brian was nowhere to be found.  What to do?

Mustering a healthy combination of courage and folly, Anson chose option (a), and blurted out a half-hearted insult under his breath.  Despite my then-strongly held pseudo pacifist beliefs, and the fact that I had never before worked violence upon anyone, I instinctively reached out, grabbed Anson by the throat, threw him against a locker, and informed him in graphic detail about the structural damage I would cause to his poop chute if he insisted on continuing these shenanigans.

The encounter was brief but exhilarating, and also very effective: Anson never bothered me again.  But as should be obvious, it was not a bona fide fistfight, and to this day, I have never actually engaged in honest-to-god fisticuffs with another human being, i.e., a violent struggle in which one guy tries to hurt another guy while the other guy does the same thing back.

I could try to live vicariously through my older brother, who once smashed another guy’s face to smithereens, but he also managed to break his own hand in the process, so it’s hard to say who came out on top there.  I guess you might say us Latke Boys just aren’t made for fighting.

That is…not with our bodies, anyway. Inside my own mind, by contrast, I beat the crap out of people all the time.  Tons of ‘em.

You see, in my imagination, I’m the lost lovechild of Bruce Lee and Adam West, blocking punches, dodging kicks.  Dropkick to the neck, uppercut to the chin, shoulder throw against a brick wall. Cracking skulls and piling up zonked-out bodies like the Undertaker.  Floating like a butterfly and stinging like a swarm of bees.  Seriously–don’t mess with Latke inside his own imagination.  He will wreck your imaginary ass. 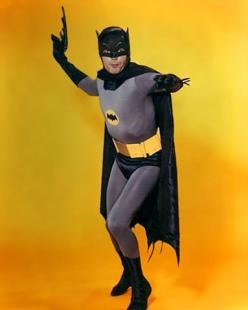 I also like to waste people in imaginary arguments.  You may do this too: the fantasy tell-off.  You know, like when someone disrespects you, and you respond (in your head) by delivering a devastating monologue that showcases your superior logic, common sense, and rhetorical prowess, leaving them not only ashamed and contrite, but also completely persuaded and begging you for forgiveness.

So who are my victims in these imaginary fights? They have evolved over time, but at this point, the vast majority are people I dream up–and then destroy–for a common offense: messing with my family because of Down syndrome.  Here are some obvious examples:

I’m sure you get the point, there’s no mystery here—these are the routine, daily slights and insults I anticipate encountering at some point in the future.  Fortunately, I haven’t had to deal with much of this yet because LP’s still only four months old.  (I think some people still might not even be able to tell LP has Down syndrome.  Is that just in my head?  I have no idea.)

Maybe none of this will ever come to pass.  Maybe all of it will.  Maybe something in between.  Very likely, a whole bunch of really nuanced, complicated stuff will happen that I can’t even dream up right now.  I have no crystal ball, but these are the imaginary asses I’m kicking these days.  (And yes, the list does include imaginary 10-year old bullies—they usually get grabbed by the collar and thrown onto their butts; worse if they fight back.)

I’m going out on a limb here, but I suspect these aggressive protective instincts are probably more common in dads than moms.  In my experience, although moms clearly advocate forcefully for their young, they often do whatever’s necessary to end a wrongdoing, but then pivot quickly to comfort the victim child.  Dads, on the other hand, sometimes linger a bit longer on the wrongdoer, something I think of as “ensuring justice.”  (I realize these are broad generalizations.  Work with me.)

The important question is what to do about these feelings in the real world.  Obviously I’m unlikely to kick anyone’s ass–I don’t even know how.  My wife is compiling a hilarious list of ways to mess with rude people, and I’m sure her ideas will come in handy.

As far as verbal confrontation goes, I think there’s a delicate balance as to if and when it’s a good idea to make a fuss about something, and if you do choose that path, how you go about doing so. The older I get, the more comfortable I am confronting strangers.  That seems to be a natural by-product of gaining a little life experience.

But if I’m constantly growling and baring my teeth like some kind of overprotective papa bear, what will I actually accomplish?  I’m confident there will be times where I’ll be well within my rights to call people out for bigotry or thoughtlessness.  But will swooping in like some kind of wannabe hero ever actually undermine my goals?  For example, will it reinforce the negative stereotype that LP can’t take care of himself?  Certainly one of the things I want very much is for LP to be as independent and self-reliant as possible.  And I want other people to know that about him, and to see it for themselves.

Also, what would it feel like for LP to have me “protecting” him all the time?  Would it make him embarrassed?  Ashamed?  Frustrated?  Suffocated?  Should I even care how he feels, as long as I’m confident that I have a bigger point to make?

What about how my words and actions will be perceived by onlookers?  How about by the subjects of my scorn?  Is it all worth the time and energy?  Why do these questions also apply to Mouse and Chipmunk, but carry so much more emotional weight when it comes to our Little Pirate?  The list goes on.  I don’t have answers to these questions right now, partly because it’s largely academic at this point.  But as time goes on, there will be a zillion different scenarios involving a zillion different people, and there certainly won’t be any one-size-fits-all solution.

At bottom, I guess all I can hope for is that I’ll have the courage and wisdom to do the “right” thing when the time comes—whether that’s kicking someone’s ass, telling them they did something wrong, or just keeping my mouth shut and moving on.