← Down Syndrome: Awareness to Acceptance
Down Syndrome Diagnosis: The Choice In The Unknown →

Parenting: Better You Than Me?

There is some sort of line I seem to have crossed after having three kids into some type of strange martyrdom. Or self-immolation? Sainthood? Maybe it is just this place we live in, but it seems like a BIG deal to have more kids than parents in a household.  Add to the fact that one of my kids (gasp) has Down syndrome, and jeepers creepers.  And I stay at home?  No job, no break from the kids?  Sainthood, halo, superhero cape, all of it.  It.  Is.  On.

In the past week, there has not been a single day in which a stranger has not made some sort of comment to me about being a stay-at-home-mom with three young kids.  Sometimes, there’s a long pause while they study LP’s face, and when that happens, the praise is laid on that much more.  People keep exclaiming how wonderful I am, or how I have my hands full, or telling me some sort of grueling story about her brother-in-law’s cousin who has four kids and just looks so tired, I’m so patient, so this, so that.  The comments are meant to be complimentary, but feel backhanded.  (Note to world: Puuuleeze don’t tell a mother how hard her job looks while her kids stand by and listen.  That is a totally messed up message to give a kid.)  As kind as I understand they mean to be, they sure as heck don’t seem to want to trade places with me.

Since when did my life become the Thing-That-Is-Impossibly-Hard, footnoted by Better-You-Than-Me?

Don’t get me wrong.  When Chipmunk is crying for the 97th time that day because she asked for help getting on her shoes, then I helped her, but I wasn’t supposed to actually help her, yes, I feel like burning her shoes and never giving her choices ever again.  When LP decides thirteen minutes of nap time from 9:24 am to 9:37 am were just fine to get him through the day, yes, I feel a twinge of desperation and do consider baby tranquilizers (I’m supposed to say “just kidding” here, right?).  When Mouse velcros herself to me so hard that her constant tugging on my yoga pants (the only thing I wear anymore) pulls them down my once-quite-firm-but-now-something-else-ass and shows everyone my underwear, yes, I have yelled at her (so call Child Protective Services, why don’t you).  Being home with the kids is hard, and I do imagine that it might be easier to drink coffee in a cubicle all day while I get to talk to rational adults.

The grass is always greener, though.  My husband comes home and tells me about the umpteenth time in a row that he gets stuck standing next to the farting asshole (literally) on the train, and that his ass and head hurt from sitting in a chair and looking at a screen for eight hours straight, how he misses his babies, the two-day old fish in the microwave at work from the guy who never cleans up after himself, wondering why the office assistant refuses to use the collator and tries to hand staple everything… Well, I think you get the point.  In his moments of frustration, he fantasizes about building sand castles and never-ending story time.

The truth is, adults aren’t actually that much more rational than children, they’re just more sophisticated, coffee addiction isn’t good for your body, sandboxes are often gross and story time ends up in an argument half the time.

There are frustrating things about every person’s life, that’s just the nature of living.  Most of them are not that bad in the grand scheme of things.  Being a stay-at-home parent or having more than two kids isn’t for everyone but that doesn’t mean that there’s something about raising kids at home that is unbearably hard.  It may just not be a good match for some people, and if they have choices, then great.

Yes, my days are full, and sometimes I lose perspective, but who doesn’t do that?   Oh, but you are a special needs parent.  Well, sure, there are some extra appointments and I spend a lot of time worrying about LP being accepted, but our day-to-day life is mind-numbingly average, actually.  Some special needs parents have some very serious medical conditions to manage, that is true.  It isn’t for me to judge how hard their lives are, and I’d challenge anyone to find a parent who would trade places into a different life.  Hearing someone else evaluate the level of difficulty of a person’s life from the outside risks too much pity, and who wants pity?

I’m neglecting my kids to write this.  Chipmunk is crying in her room because she has to wear pants (no clean dresses).  I’ve given up trying to console her—it just makes it worse.  Mouse is reading LP a book but it has turned into a boss-a-thon, and LP is ignoring her, trying his hardest to disassemble his diaper.  I have no cape, no halo, no wings.  I’m just a mama who loves her kids and wants to vent sometimes.  My life can get hard sometimes but all life is hard.  Is my life harder than the average person?  All I can say is that my life does seem pretty average on the whole.

We’re happy.  Come join us.  We’d love to have you over for dinner (if you’ll accept pb&j and eggs, because that’s all we have to eat in the house). 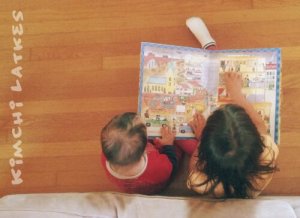 Diaper secured, boss-a-thon temporarily halted. Mourning over lack of dress in the other room, continuing.

18 Comments on “Parenting: Better You Than Me?”