On Delayed Revelation and Sisterhood

I have moments of delayed revelation.  Something happens and it sticks in my head, rolling around, gathering shape and meaning until I’m ready to understand.  I had one of those moments the other day, on Mouse’s birthday.  It wasn’t until we went to a wedding that the entire moment really revealed itself to me.  Toy trucks, shots with bartenders, wedding speeches, and the bond of sisterhood.  It’ll make sense, I promise.

We went to the California Academy of Sciences for Mouse’s birthday.  The girls watched butterflies, searched for fish, and learned about earthquakes.  LP alternated between sleeping on my back and eating my hair.  It was dandy.  After lunch we went out to a little grassy area behind the restaurant so the girls could run around.  They headed for two seal statues, sat on them, and promptly started arguing.  Something about naming one of the seals “Baby Bird” or “Baby Turtle”.  It was heated.  De-sistering was threatened.

All of a sudden a little boy walked up to the seal.  He parked himself in front of Mouse.  Staring.  It was obvious he wanted to connect with her, but didn’t know how.  No time for sister fights now.

He went forward, Mouse went backward.  Forward.  Backward.  Then he offered Mouse his toy truck.  Now, if I know anything about kids, I know that this is a serious gesture.  No dice.  Still, he kept creeping on her until she nearly fell into the wood chips.  Mouse was, as is typical in these situations, at a loss.  Chipmunk dutifully came to her aid and broke the news to the guy:

I got up and had an immediate conversation with both girls about kindness and diplomacy.  Apologies were made, boundaries negotiated, space offered.  In the end, they did play together, although the girls didn’t break sister ranks.  They were playing with him.

Then came the flash of my girls in the future.  Older Mouse and Older Chipmunk, under-aged, yet at some bar somewhere, arguing, when someone approaches.

I could see it too well.  Mouse will be anxious about her fake ID (procured, likely, by Chipmunk).  Chipmunk has probably convinced her sister that they’d only have one drink and go home, only to end up doing shots with the bartender.  Mouse will attract someone’s attention, but be too tongue-tied and uncomfortable with the spectacle to reclaim her space.  Chipmunk, always willing to butt in, delivers the devastating line.  She’s just not that into you.

Don’t laugh at me.

Mouse and Chipmunk are only two-and-a-half years apart, and it is fascinating to watch them be sisters.  Right now, they are with each other nearly every hour of every day.  Lately, they’ve even taken to sleeping in the same bed together.  I can see how this closeness knits them together in a way that I probably will never understand.  My brother is eleven years younger than I am and my sister died as a very young baby.  I love my brother and we have a good relationship that is unique due to our age difference, but in many ways, we grew up as two only-children.

Latke’s cousin got married this past weekend.  When the bride’s younger sister got up and made her speech, I couldn’t help but think of my little girls who would one day be so big.

Little Sister talked about knowing Big Sister in an intimate, almost secret way. She, of course, talked about good secrets—an intuitive kind of love that held them together, even as they lived in opposite parts of the country.  Those secrets would be (and were meant to be) shared, as her sister embarked on a new life with her husband.  It was a wedding speech, after all, and a beautiful one at that.

Maybe because Latke’s extended family was there, I thought about sibling relationships quite a bit this weekend.  Latke’s mom has two sisters, and having lost my sister at a very young age, I’ve often wondered about what it would be to grow up with so much… sisterness.  Watching my girls grow into themselves, I can see how that sister relationship can be full of secrets.  Beautiful, happy secrets, and some vulnerable, troubled secrets.  Secrets that they’ll one day share with other close friends, partners, maybe even my grandchildren.

Chipmunk already has some kind of intuition about why her sister clams up in front of others.  Mouse is calming and reassuring for her sister who tends towards the fiery, rash side of things.  When they’re not bickering, they laugh together in an easy, synchronous way.  I imagine that they’ll know each other the same way we know our hearts beat, just by feeling.

So now, Chipmunk will break hearts for her sister at the playground.  Whatever their arguments are, I hope they’ll be dropped when one needs the other’s support.  Maybe in a couple of decades, one will decide to settle down, and the other will talk about their intuitive love for each other—broken and mended hearts, secrets meant to be shared, and easy laughter.

I’m sure none of it will turn out as I expect.  As their mother, I hope to have the privilege of watching it all, no matter what. 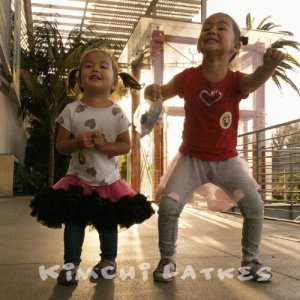 p.s. If you are reading this, Mouse and Chipmunk, this is NO WAY condones under-aged drinking.  I’m watching you.

(I’m taking a break from my ranting for a sec.  Just needed a little recharge before I went back, ya know?)