← Motherhood: Pulled from the Ether
Liebster: A Bunch of Random Stuff About Me →

Unbeknownst to this blog (yes, I’ve sort of come to see this blog as an entity in its own right. I keep secrets from you, blog, and did you know that??), I’ve been quietly freaking out about the possibility that LP wouldn’t eat regular food.  Part of it is that I’m so food-centric, part of it is that struggling with solids is such a common part of the “baby with Ds” profile.  I just hated the idea that my kid might struggle with eating.  I know, kind of irrational, and based on a stereotype.  Plus, I know plenty of moms who had kids go through rough times with solids and they all seemed to get through it in the end. Still. I dunno, it just bugged me more than some of the other potentials, and I figured if I was most worried about it, it would definitely come to pass.

For reference, Mouse and Chipmunk just ate food, simple, easy peasy, no problem.  At some point, when they started sitting up, I’d just give them little bits of food.  They’d stick it in their mouths, gum it up, and swallow.  Repeat.

Side note: Chipmunk had a phase during which she wouldn’t eat much except for potatoes and bacon fat.  That passed, thank goodness.

Anyhoo.  I’ve given LP food once before, but thought it might have been a fluke, because he seemed to be unaware that it was even happening.  But… this morning, LP was sitting in my lap and he taking swipes at my fork.  First, it thrilled me to no end that Mr. Spaghetti Arms was swiping at anything.  Second, I was double thrilled that he wanted my food.  So I gave him some.  He chewed.  He swallowed.  Then he looked up at me with a huge grin.  I gave him another bite, and he actually opened his mouth in anticipation.  (Cue Handel’s Messiah)

Total breakfast: Two pieces of potato, a bite of egg yolk, and two itty bitty pieces of strawberry.  Not bad, eh?  I would have given him more, but then started worrying that it was too much.  Yeah.  Can’t win.

I am not sure why this has been such a big deal for me.   Maybe I just needed the reminder that he was just like the rest of the Taters.   Different in some ways, I can’t deny that. Aren’t all siblings different in some ways, though? Mouse chews her knuckles so hard when she gets nervous that she gives herself rashes. She didn’t really speak until she was two years old. Chipmunk. Well. That child is so afraid of animals that she will run screaming from a butterfly. Talk about things that make a mother worry. What is that child going to do for field trips and biology class?

I’ve been spending a lot of time outraged about the social barriers LP will face and worrying over his medical issues, but it was nice to be reminded that as far as development goes, the timeline might be spread out, but it is turning out to be pretty darn uneventful*.  Chew.  Swallow.  Grin. 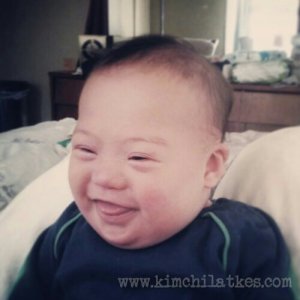 *I’m fully aware that by writing this, I am sealing our fates to face some huge challenge when it comes to LP’s development.  It’s cool, kiddo.  Don’t walk until you’re 5, don’t talk ever, whatever it is, we’ll figure it out.  Love you.

18 Comments on “The Pirate Eats”