5 Things I’m Trying Not To Say About Babies

While I was at the park this morning with the kids, a woman approached us, smiling at LP.  My spidey sense buzzed a little.  But alright, I don’t want to pre-judge you, so let’s chat.

Halfway in, it started.  Groan.  It was clear she didn’t recognize that LP has Down syndrome, which was fine, but she also was wholly unaware that he might not fit into her idea of “normal”.  So all the questions about LP, along with her bragging about how early her grandson rolled over, sat up, walked, how “gifted” he was… Well, can you be happy for a person while also secretly wanting to smack them upside the head?  I knew she didn’t mean any harm and was just in love with her grandson, but I couldn’t help being irritated.

I’m not pointing fingers.  It is just the common discussion going around; I’m sure I’ve been that woman to someone else (and for that I’m sorry).  I never loved these kinds of discussions before LP, but honestly, the girls never fell outside of “normal” so I just shrugged and moved on.  Now that I have a child who isn’t going to fit into “normal” (and nor should he, for that matter), well, it stings.

The same play gets acted out hundreds, thousands, millions of times in a theater that seems way too concerned with abilities, milestones, intelligence, and being typical.  What’s more, the current theater isn’t terribly inclusive, and that means it isn’t great for any of my kids, not just LP.

So.  Five things I wish we didn’t talk about quite so much…

How old is your baby?

I know this sounds completely innocuous, but think about it.  Does it matter how old that baby is?  Not that talking about age is so terrible, but I’m trying to really examine why I ask that question when I do.  I’ll be honest, a lot of the times I’ve asked that question in the past, I’ve been sizing that kid up in my head, guessing an age and wanting to know if I am close.  The other times, I’ve wanted to compare that kid to my kid because they seemed close in age. Not all babies stick right on the 50th percentiles on growth charts, not all babies reach milestones in the average time frame.  What if the answer is completely unexpected?  Is knowing that number so important?

Babies just come out the way they come out.  Some are cute little peanuts and some are cute big brazil nuts.  The elder Taters were both very big babies, and I admit to feeling proud over it, but now, I feel silly for having thought that.  It isn’t something I could really take credit for, after all.  I treat LP the same way as I did the girls, and he’s just a different shape.

If I’m a stranger, I don’t know that baby and the parent doesn’t know me.  So no matter my good intentions, it seems better to leave well enough alone.  The parenting world is stuffed to the gills with timelines, expectations, timeframes, and predictions for when babies will do what.  It is doubtful that anything I—the random stranger—have to say is news.  In fact, I’d wager that the parent has heard everything quite a few times already.  Oh, say, in emails, books, the pediatrician’s office, grandparents, aunts, uncles, co-workers.  Seriously, they’re all set.

What a smart baby.

Maybe it is just me, but I really don’t think that early behavior is such a great predictor of future smarts.  Not only is the very definition of “smart” very slippery, but constantly telling children that they are smart, as if that is a goal in and of itself, has some very undesirable consequences (seriously, click on the link, it’s interesting).  I now have a child who may not ever fit into the typical definition of “smart” (but who will undoubtedly be intelligent), and hearing this phrase just makes me wince.  Even if we could all agree on a definition of “smart”, complimenting a baby for being smart feels neither here nor there.  It isn’t as if the the baby is trying to be anything, so what does it do other than give a false sense of achievement?

What about more praise for being kind, hard-working, thoughtful, or funny?  I’d much rather some of these other words be used for all three of my children.

It doesn’t matter, as long as they’re healthy.

I used to think this was one of the safest things to say.  Now, no one is running around hoping they have a child with high medical needs.  Still, what happens when we unwillingly have to cross over that line?  All of a sudden you’re over there.

No one says it to the mother whose child just got diagnosed with leukemia.  No one says it to the father whose baby needs open heart surgery right at birth.  No one says it because it no longer rings true.  It isn’t about “as long as they’re healthy”, but more about being alive, being loved, and being valued, period.  I still have not walked in “high medical needs” shoes but I try not to draw any dividing lines based on health status anymore.  Medical issues just happen.  Kids are still kids.  Life is still life.

Please don’t get me wrong, it isn’t as if I think that we can never talk about milestones, age, size, or health.  It is just that I might not know everything about the person in front of me, or whoever might be listening a few feet over.

I want to talk more about character, connecting, humor, and celebrating difference.  Just because a conversation is casual doesn’t mean it has to be superficial.  We can  all agree that there is more to a baby than health status and numbers, right?  Apologies to the bajillions of parents who already figured this stuff out.  I admit, I knew it before and ignored it.  I’m just trying to know it a little better. 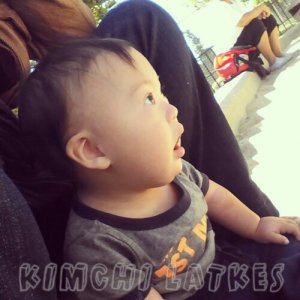 Dear Mama, Let’s Talk About Me.

Let’s talk about me, shall we?  I gotta be honest, ever since you calmed down with the whole “Down syndrome” thing, I feel like I’m not getting nearly as much attention as I should have.  I mean, I guess you’re doing all this “advocacy” stuff, but honesty, that looks suspiciously similar to when you say you’re hanging out with your new online mama friends.  Just sayin’.  I don’t mind being a supernatural-angel-gift-from-God if that means I get all your attention.  Wink, wink. END_OF_DOCUMENT_TOKEN_TO_BE_REPLACED

I lied about my son today.

We took the Taters cross-country to see Latke’s parents this week. We had a great time, the kids got spoiled, all was well.

On our return flight, I sat by myself with LP, while Latke had the girls across the aisle.

As I sat down, the man by the window smiled and reached out for LP’s hand.  I have to admit every time a stranger takes an interest in LP I still have a moment of trepidation.  I don’t blurt anything out anymore, but I still hold my breath for a second, waiting for that whiff of scrutiny. END_OF_DOCUMENT_TOKEN_TO_BE_REPLACED