← #JusticeForTrayvon
Down Syndrome, Science, and Mystery →

I lied about my son today.

We took the Taters cross-country to see Latke’s parents this week. We had a great time, the kids got spoiled, all was well.

On our return flight, I sat by myself with LP, while Latke had the girls across the aisle.

As I sat down, the man by the window smiled and reached out for LP’s hand.  I have to admit every time a stranger takes an interest in LP I still have a moment of trepidation.  I don’t blurt anything out anymore, but I still hold my breath for a second, waiting for that whiff of scrutiny.

Mr. Stranger seemed nice.  I apologized ahead of time for any yelling LP might do during the flight.  He said he had his own kids and seemed genuinely tickled when LP grinned at him. I mean, who wouldn’t be charmed? The kid has an infectious smile.

So I relaxed.  We made some small talk, Mr. Stranger pulled out a book, we both settled in.

All of a sudden, he looked up and asked, “How old is he? Three months?  Four?  Does he laugh yet?”

I am not sure why in that situation, of all situations, I decided to lie. I’ve never done it before. In fact, I’ve felt open to a lot of awkward conversations about T21 and seen them through, with positive results. 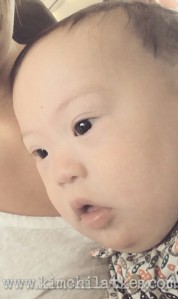 I guess I could blame it on being tired from the travel day. Or I could argue that I can’t, shouldn’t even, make every single moment about teaching or advocacy.

Or, I can tell you how I felt.  I just didn’t want to do it.  I didn’t want to carefully parse my words, to gently suggest to Mr. Stranger that milestones don’t really mean anything and that maybe it is just a wee bit rude to go and ask a total stranger where her kids is developmentally. I didn’t want to have to consciously decide to smile instead of rolling my eyes. I didn’t want to have that fleeting moment when I debate whether to utter the words “Down syndrome” and wait for the flicker of pity.

But… I don’t really have an excuse, and it really shouldn’t be about my feelings.  It was selfish.  I lied only for my comfort, and I’m sorry.

Sorry, Mr. Stranger.  My kid rocks.  You could have rocked, had I given you the chance.